How do language learners read subtitles? Can we use eye-tracking to determine effective viewing strategies? Can we teach students effective viewing behavior to improve language learning? These are some of the central questions in Sjoerd Lindenburg’s PhD project, funded by an NWO Promotiebeurs voor leraren (https://vakdidactiekgw.nl/author/sjoerdlindenburg/) and carried out in collaboration between Stichting Alberdingk Thijm Scholen and Leiden University (ICLON & LUCL).

Q: What does your research focus on primarily?

A: My research focuses on second language learners’ behavior. Obviously, you process the information in a certain way, but there is a difference when it is in a foreign language rather than in your first language, especially in the use of subtitling in that context.

Q: What sparked your interest?

A: I completed a Master’s in Translation here at Leiden University and I took one of Lettie Dorst’s courses, Multimodal Translation, which I thought was really interesting. As I wanted to get my teacher’s degree as well, I looked for ways to merge those two interests together. Then it turned out that a lot of research had been done on the use of subtitles for language learning, mostly during the 1970s and 1980s, but with a recent resurgence in popularity from around the 2010s.

Q: Does your research focus on other languages than English?

A: It focuses on English and French, because we want to implement our findings at the secondary school I work at (teaching English). As English has a rather unique position in the Netherlands – most children start learning it very early on, watching English audiovisual content on YouTube or television – we are also looking at French to even this exposure effect out. Most pupils don’t start learning French until they are in high school and most do not watch a lot of audiovisual content in French or listen to French music.

Q: What are your plans for the future? How do you plan on carrying out this project?

A: It is a five-year PhD-project, consisting of three phases: phase one is gaining insight into how people view audiovisual materials with subtitles. That is, whether they are good at the languages that we have, so English and French, and also Japanese for this first part, to see where they look at. To do this, we are using the eye-tracker in the LUCL lab. When do language learners look at certain parts and why do they look at them? How do people watch subtitled material? Part two is hopefully going to be next year, and we will be doing the same thing with secondary school students, to see if they behave differently when watching TV series, as they might not be as interested in learning a language as someone who chose to study it. Then part three is using the information we have gathered to create lessons to teach students how to watch those videos in a way in which they can maximize their language learning without taking away the entertainment videos provide us. Of course, watching Netflix is fun, and it is also educational, but if you make it too educational, will they still do it?

Q: What would you say are the main difficulties? Are there specific difficulties per age group, or is it more difficult if someone is obliged to learn the language rather than if they choose to do so voluntarily?

A: I think that right now, the biggest difficulty has nothing to do with participants, but with the experimental set-up. Technical difficulties have thus far been the worst, because we use such a very specific machine for this research. Another difficulty is with participants. Right now, people view parts of a TV show and afterwards the participant and I re-watch them together to try and get to the bottom of why they did what they did, and to see if they notice anything in their own behavior. As a researcher I have the data there, but I do not know the reasons behind their behavior. However, participants always understand less of their own behavior than I would have liked, even when re-watching their own recordings.

Q: Our last question: Did the pandemic really change the way you work or the duration of the experiment? Were there any delays?

A: No, I had only just started my PhD, and the technical difficulties meant that I could not conduct the experiment anyway at that point. The only issue I had with Covid-19 was that I had it three weeks ago, which then postponed it for a little bit but only very marginally.

After the interview, Sjoerd walked us to the eye-tracking laboratory. There, we could see how the experiment works and we actually took part in it. We took turns in the soundproof booth where a computer screen streamed bits of different TV shows in three different languages. Outside, Sjoerd could see our eyes’ movements on another screen, and he recorded them, creating a sort of map showing which areas of the screen our eyes were focusing on the most. Each one of us had to see three different videos, but only with the last two our eye movements were recorded. The first video had Dutch subtitles, while in the second one the subtitles matched the foreign language that was being spoken, namely English, then Japanese, then French. After each session, participants are usually dismissed, so that Sjoerd can export the video and download the data. Then, the participants are called back into the lab, and they are asked questions regarding their understanding of the plot of the TV show they saw and their awareness of their own behavior when looking at the screen.

We are glad we took part in this experiment, and we hope that we made a small contribution to Sjoerd’s research.

Do you speak Dutch and English and are you an audiovisual archives enthusiast? Then join us for the Europeana XX: Subtitle-a-thon Challenge Amsterdam! Share your language and subtitling skills, receive a participation certificate and win prizes!

The Netherlands Institute for Sound and Vision, The European Union National Institutes for Culture (EUNIC) Cluster The Netherlands, and the Leiden University Centre for Linguistics are pleased to invite you to a subtitle-a-thon focused on audiovisual heritage.

The kick-off of the subtitle-a-thon takes place on Sunday, September 26th at 15.00 CET as part of one of the activities celebrating the European Day of Languages 2021. The event will start with a two-hour introductory session and will run online for seven days with a closing session on Saturday, October 2nd at 17.00 CET. The event will be held in English. Registration opens on September 7th  at 15.00 CET at www.subtitleathon.eu.

The Subtitle-a-thons are four sprint-like online events organised by the Deutsches Filminstitut & Filmmuseum – DFF (Germany), The Istituto Luce Cinecittà (Italy), the National Film Archive – Audiovisual Institute – FINA (Poland) and, the Netherlands Institute for Sound and Vision – NISV (The Netherlands). During the events, people with different language skills work together toward a common goal: to create and add different subtitles to archival media fragments from various European collections.

The aim of the subtitle-a-thon initiative is to engage language learners and students in a playful way with multilinguality and audiovisual archival material, while raising awareness about the value of multilingual access to AV archival footage. The events also hope to promote European national languages and to stimulate discussions around the value of language, and thereby increasing the interest of local communities in 20th-century cultural heritage. The subtitle-a-thons are educational activities highlighting the profession of translators. The subtitles produced in the event do not intend to compete with nor to replace professional level translation. 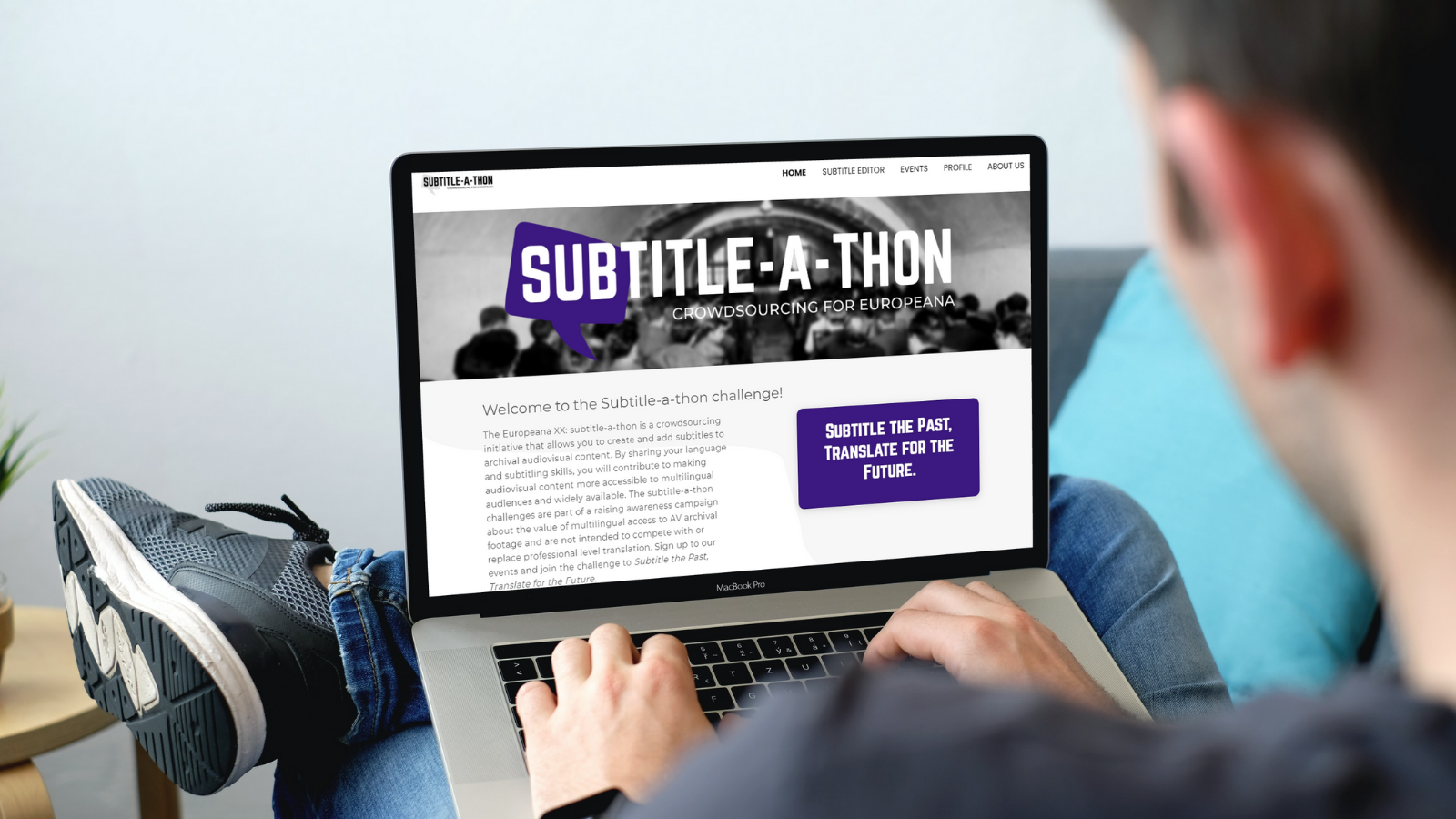 The event targets youngsters and adults interested in audiovisual heritage, language and multilingualism. And more specifically, students, translators, language teachers and followers of advanced language courses (C1 and above). It is eligible only for participants fluent in Dutch, Flemish, and English. Participants will be invited to work individually, using a specialised media player with a subtitle editor, to subtitle the available audiovisual material. The winners of the Subtitle-a-thon Challenge Amsterdam will receive online prizes and all entrants will receive a participation certificate.

The participants will be subtitling short clips coming from the Netherlands Institute for Sound and Vision archival collection, as well as from the British Broadcasting Corporation.

We invite you to:

Learn more about the event and register today for free here: https://www.subtitleathon.eu/event/amsterdam/

Europeana XX: Subtitle-a-thon Challenge Amsterdam is hosted by the Netherlands Institute for Sound and Vision under Europeana XX: Century of Change, an EU-funded project dedicated to opening up 20th-century digital heritage collections, highlighting the changes that shaped Europe and still impact our world and lives today. Europeana XX is part of the Europeana family of initiatives supporting European cultural heritage institutions in sharing their digitised collections. Millions of digital objects from all across Europe are showcased on Europeana.eu, the trusted portal for digital cultural heritage in Europe.

Explore the collections and stories from 20th-century history and culture through the Europeana XX editorials at www.europeana.eu/en/highlights-from-the-20th-century